When I was in my early twenties, it was suddenly no longer safe to eat raw eggs. Scientists supposedly had new information that raw eggs were making us sick with salmonella. If I had questioned this, I may have been told it was because chickens were no longer raised in the back yards of farmers and that they were now raised in Concentrated Animal Feeding Operations (CAFOs) – livestock factories. If I had asked, perhaps someone would have told me that CAFO conditions are deplorable and bacteria-laden. When I was six or seven years old, our milkman stopped coming to our house. I wish I was old enough to question why he disappeared. Maybe I would have been told that the convenience of supermarkets and a ‘need’ to pasteurize contributed to his disappearance. I wish I had thought to question this when I got older, too. When I was in my early twenties everyone around me was saying it isn’t good to drink the fat that is in milk. I wish I asked why the cream and fat were no longer safe to drink and why milk was now sold in choices of 1%, 2% and skim. Maybe I would have been told it has nothing to do with our health and more to do with it being much more lucrative to separate milk into different parts – parts that the body might not be able see as ‘food.’ Maybe I would have realized if it were, in fact, better for us to drink 1%, 2% and skim that God would have had those different milks coming right out of different ‘spigots’ on the cow.

Suddenly in my twenties it was no longer safe to eat raw hamburger. Personally, I only ever tried it once–I didn’t like it. Many who are ten years my senior told me they grew up on raw hamburger. They anxiously waited for their mothers to turn their backs while making meatloaf so they could steal a small hunk. I wish I had asked why it was no longer safe to do this; I might have learned that the cows were no longer raised on farms, but instead, again, in CAFOs. I may have learned that cows raised in CAFOs now stand in their own manure up to their ankles, and sometimes up to their udders.

In my thirties, it was simply no longer safe to eat beef – period. I wish I had questioned why. Was it because cows were no longer raised on farms? No longer eating grass in pastures? and instead being fed a steady diet of corn – corn that is no longer sprayed with insecticide because the insecticide is now on the INSIDE? The same corn that causes e. coli in their stomachs? I don’t know about you, but that doesn’t sound good to me!

In my later thirties I wish I had questioned it again. Would I have learned the United States was the only country that approved Recombinant Bovine Growth Hormone (rBGH) and that other countries didn’t approve it because it makes the cows sick?

In my twenties I also wondered, what is this ‘canola’ oil that everyone is telling me to use. Why is something that I’ve never heard of suddenly the ‘heart-healthy’ thing to be eating? I wish I had not trusted those rumors and did my own research – maybe I would have realized it simply wasn’t true. Of course, I didn’t have the Internet or Google back then. I am embarrassed that I never even asked, “What is a Canola?” I knew what the olive in olive oil was and the sunflower in sunflower oil. If only I’d asked, perhaps someone may have told me that it’s an acronym for – Canadian Oil Low Acid. Maybe I would have learned that it came from a plant that was toxic before it was modified to be ‘safe’ for human consumption. I may have been told – before it was modified to be ‘safe’ for human consumption that it was only used for oiling machines.

I wish I had thought to ask, “What is Lard and why is it no longer good for us?” I knew it was a fat and that it came from an animal, but that was about all I knew. I wish I had asked why it was no longer ‘healthy’ to eat. Maybe I would have heard about a company that invented a product called shortening that was shelf stable for years and that there was a LOT more money to be made with this new product. If only I had asked, maybe someone would have warned me that it also might ‘shorten’ my life.

I am embarrassed and ashamed that I never took a long, hard look at what I was eating until I became so sick that I could barely function anymore. But in my own defense, I wasn’t just a Baby Boomer – I was a Supermarket Kid, too. I wish I had questioned when I was young, on what our Creator had intended my body to run. I might have learned it’s supposed to simply run on real food. Real food – it’s that plain and simple. Okay, so deciphering what is real food and what is fake/plastic food might be a whole ‘nother story. By now, most of us have learned that margarine is one molecule away from being plastic. Although I’m still learning about ‘plastic’ foods every day, I think I am finally getting it under control! I hope by sharing my experience and what I’ve learned about food will help others Make Healthier Choices. 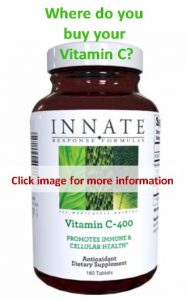